Send In The Clowns. There Ought To Be Clowns.

Behold the too-early-to-do-anything Presidential race of 2016. The polls are polling. The percentages are percentaging. And Right-wing candidates and voters are frothing at the mouth in anticipation of the Republican National Convention nomination which is still 11 months away. Isn’t politics exciting?

I know that it’s hard for people to remember what it was like at this time four years ago. It’s just all so confusing. They probably don’t recall that the candidates polling the highest this early in the game were long gone by the time the convention rolled around. We still have sound clips from Jimmy “The rent is too damn high” McMillan, the months where pizza chain owner Herman Cain was polling higher than the other candidates because he was funny, and vocal supporters of Michele Bachmann and Newt Gingrich gave them their high poll numbers well into the months before the convention. Then there was the Libertarian favorite, Ron Paul.

Paul was such a pain in the GOP establishment asses the convention organizers made sure his delegates were seated far from the stage. They refused to let him speak unless he endorsed Mitt Romney, the appointed “heir” to the nomination as declared by the billionaire donors who bought him fair and square. Like hell they were going to let some independent-thinking outsider get THEIR nomination. The same thing is happening now.

The Koch Brothers are betting their 9 million dollars on their pet, Scott Walker. Walker is a good little Koch-soldier, does everything they tell him to do, and pushes all their favorite welfare-for-the-rich buttons. I mean really, who wants to put money into universities for those stupid middle class and poor people when you can have a brand new basketball stadium where the rich people can watch their teams in complete comfort.  What are you, some kind of communist?

Of course Donald Trump has really been the monkey-wrench in the works. He already has tons of money so he doesn’t need backers like the Kochs. The man can say whatever he wants because he’s rich and he doesn’t care what anyone thinks of him. In fact, the worse his sound bites the higher is poll numbers. It’s Karma in all it’s glory – the shining Republican candidate who accurately reflects the face of the modern Republican Party is an anathema to the “establishment” Republicans.

I think I know why Jon Stewart left The Daily Show before the elections. The absolute idiocy by the Right not only makes it too easy to create satire, but it also flies in the face of common sense and reason. Those of us who can think for ourselves are both amused and appalled at the amount of stupid on display. Just when you think they can’t go any lower, someone in politics (or Fox News) takes it as a personal challenge and lowers the bar even more.

It will be an interesting campaign for the Republican candidates. All of them. But I know for sure the “establishment” Republicans will chase off Trump. But that’s okay because he says he’ll come back as an Independent. I really, really hope he does because if Jeb Bush wins the nomination it will be 1992 all over again: a Bush, a Clinton, and an Independent. A bleeding-heart liberal can only hope.

Maybe Clint Eastwood will be at the convention again like he was in 2012. Or even better, maybe the empty chair. 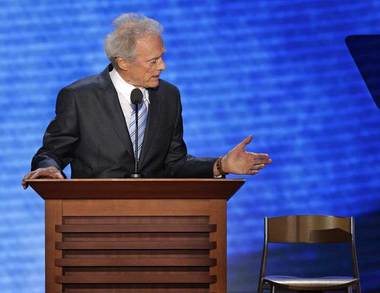